A study published by researchers at the University of Georgia and University of South Carolina has showed that around 10% of athletes demonstrate ‘poor effort’ on their baseline concussion tests.

The original study was conducted in 2007 using High-School athletes to see whether poor effort on baseline neuropsychological tests was expected to influence interpretation of post-concussion assessment scores. Results showed that ‘statistically significant’ differences existed between effort groups. The study concluded that post-concussion test scores should include effort tests to prevent athletes from deliberately manipulating pre-injury results.

From the study discussion…

The presumption that all high school athletes exert adequate effort during all assessments was proved to be incorrect.

The study used a sample of over 200 athletes from Northeast Georgia high-school sports programs. Athletes were run through a series of effort tests including a Dot Counting Test (DCT) (1) and Rey 15-Item Test (2) with recognition trial. These tests were conducted at the same time athletes were completing baseline concussion tests.

The research team was not expecting athletes to demonstrate a lack of effort during testing. Perhaps unsurprisingly, those participants that showed a lack of effort also had diminished baseline concussion tests scores. It was believed that this lack of effort was an attempt to reduce their baselines, making it easier to pass post-injury testing in the future.

The study’s authors explain that this lack of effort during testing presents a challenge for clinicians and trainers who might not be expecting athletes to deliberately perform poorly. It’s not intuitive that an athlete would want to perform badly on these tests. But the data shows strong evidence that around 1 in 10 will attempt to manipulate baseline test results.

Do not assume that all athletes will put forth the correct effort during baseline concussion testing. The researchers explain that doctors and sports medicine professionals should use an effort test. The evidence suggests that the use of an effort test would help to validate evidence, especially for baseline and post-injury concussion scores. This kind of data could help to govern return-to-play and treatment protocols.

Get concussion news delivered straight to your inbox 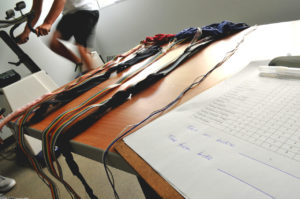 10% of athletes are cheating on baseline concussion tests